Home » airbnb » Why is Airbnb offering a bonus for new hosts in Vancouver?

Why is Airbnb offering a bonus for new hosts in Vancouver?

Here’s an odd thing. Airbnb has a new program in Vancouver, offering $250 cash bonus for first-time hosts. It’s odd for two reasons. First, the company has been under pressure for exacerbating the city’s housing affordability crisis (Vancouver’s housing market is the most expensive in North America), so this looks like asking for more trouble. Second, Airbnb in Vancouver is already going gangbusters, so why does Airbnb feel the need to pay out to attract new hosts?

Here is a chart that shows what I mean by “gangbusters”. The y axis is the total reviews per month for a set of North American cities, with Vancouver picked out in bold red. The total number of visits is probably about one-and-a-half times this number, so it’s a measure of overall Airbnb traffic in the city. You can see there is a seasonal trend, with traffic dropping off over winter and picking up again in summer, but it’s pretty clear that this summer’s peak is well above last summer for most of these cities. Vancouver is now running at well over twice the volume of last year. (Click to expand, and hit the back button to return to the post) 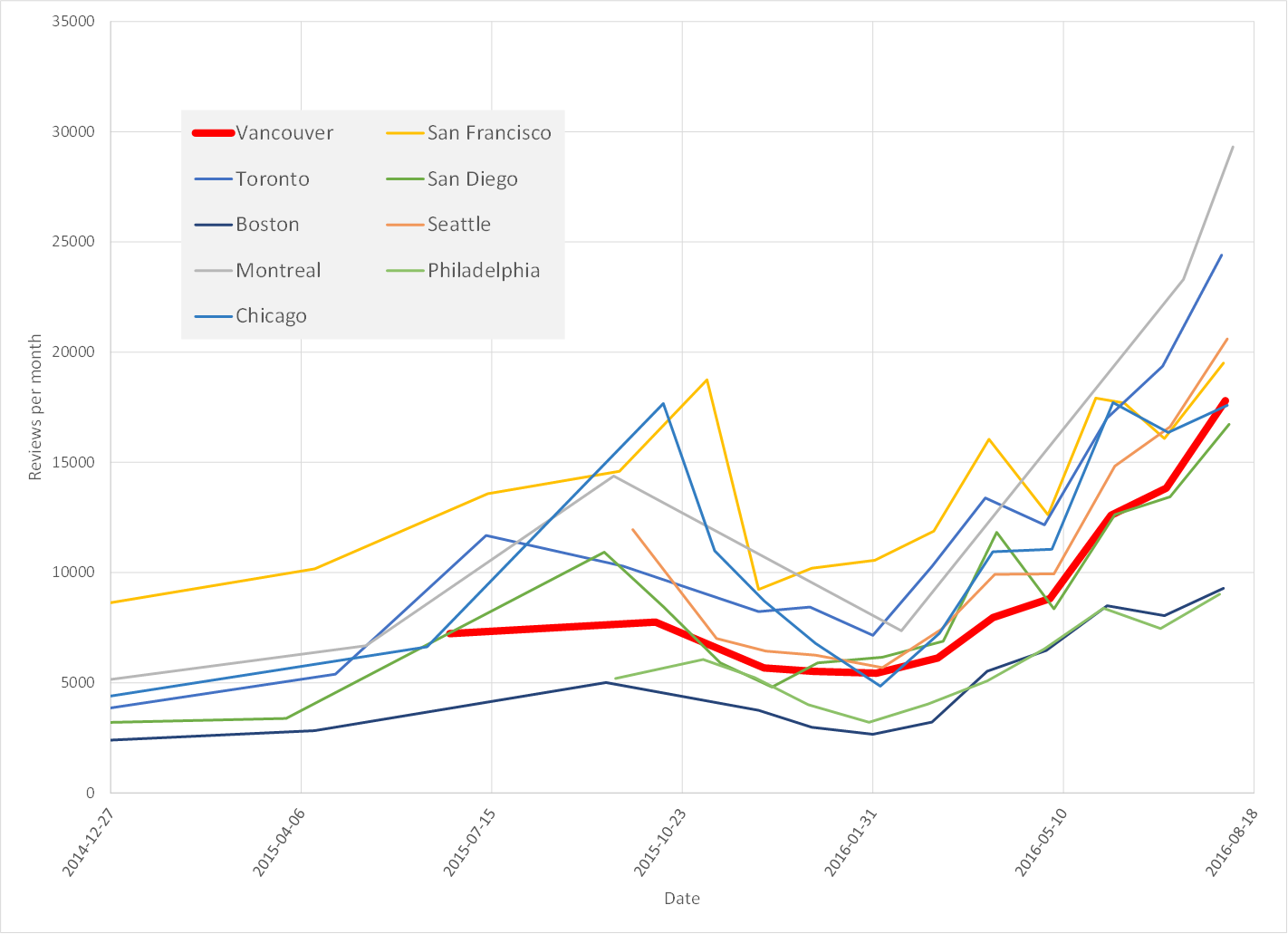 But there’s another way of looking at this growth. Vancouver is again highlighted in bold red in the chart below, which unpacks the overall traffic shown above. The x axis is the number of listings in the city, and the y axis is the average occupancy rate measured as the number of reviews per month per listing. Multiply them together and you get the total traffic for the city.

For most cities the trend is to more listings, with the occupancy rate going through the same seasonal trend we saw up above. (Although Philadelphia and Chicago are not doing so great, and San Francisco (the curly green line) seems to have hit a limit of listings, probably because of the drastic action Airbnb is taking to legitimize itself in that city. But that’s another story.) 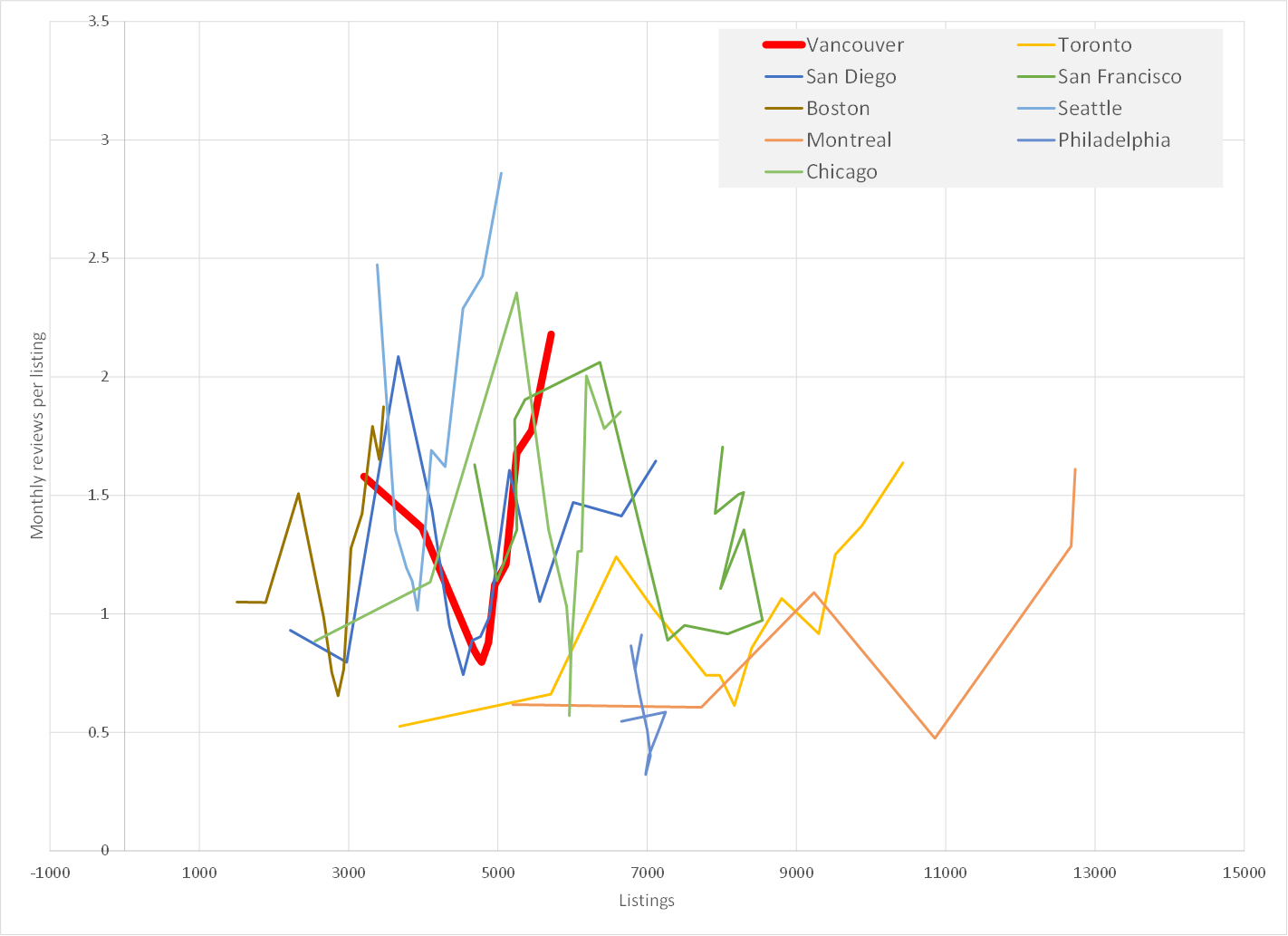 Now if a hotel was counted as a single listing it would be way to the top left of this chart, while Airbnb wants to claim that its hosts are only occasionally renting out the place in which they live — which translates into the bottom right. The fact that Vancouver listings are getting used more often could be bad news for Airbnb in its battle for legitimacy, so if it can attract more hosts they may take up some of the slack and move the line out to the right and down a bit.

To step back a bit, you do have to wonder if “bottom right” or “top left” makes much of a difference from the actual affordability and neighbourhood impact perspective. If you live in an apartment building and every other person rents out their place once a month, that’s the same impact in terms of traffic, extra utilities and the other things people complain about than a small number of people renting out their places all the time. And thousands of tourists staying in a small neighbourhood will have a similar impact (good and bad) in some ways if they are scattered across many listings or huddled together in a few. And what about the impact on house prices in high-traffic hotspots? It’s not obvious to me that a large number of low-occupancy listings has less of an impact than a small number of high-occupancy listings, though I could be convinced either way.

Anyway, I feel pretty confident that Airbnb is making its offer to offset the bad image that goes with the high-occupancy rates that Vancouver is now experiencing. And if there’s an offer for Seattle hosts, well that will confirm my suspicions.

Update: Thanks to Caroline O’Donovan for pointing me to this: an Airbnb host promotion in Seattle. Suspicions confirmed!